A fashion magazine like no other, VAR Magazine celebrated the release its first printed edition of their publication at Wooster Street Social Club on Sunday, April 15th. Some of you may have heard of this venue from the popular TLC reality television show “NY Ink.” Now, some of you might be wondering why a fashion magazine would be partnering with a tattoo shop, but trust us it is only natural that VAR Magazine would do so. Unlike other fashion magazines, VAR wants to help introduce a new era of tattoo culture, art, music, lifestyle and a love of body art.

Rank My Dentist has sponsored this event because we are here for more than just helping you rate a dentist and read dentists reviews. We want the visitors of our site to see a lot more than just the latest technology in dental work, but to experience some culture and art at the same time. This event is the launch VAR’s brilliant vision of tattoo and body art into our mainstream culture. They want to influence and inspire society to realize that there is art all around them. This is why VAR’s first issue is focusing on the desire for easy access for the readers and fans while returning to the tradition of fine art’s elite status as a physical object by publishing this edition with icon Dave Navarro.

Like Rank My Dentist, the people at VAR magazine understand that most readers and people today prefer the digital media and technology as their main source of information. So just like Rank My Dentist gives you the latest treatment and equipment update that the top cosmetic dentists are using today, VAR magazine recognizes that readers should have access to on-demand video, audio interviews, images and text that appears with a tap of a finger or a click of a mouse.

The event was hosted by FUSE TV’s Juliya Chernetsky and she greeted all the guests arriving on this event’s red carpet, and posed with numerous guests in front of many photographers. Entertainment Sunday night was provided by a mix of LIVE DJ sets and musical performances, and by the infamous Steve Lewis. Drinks were plenty and the food was of the best kind. About 300 of New York City’s most influential people in the creative, artistic and trendsetting communities attended, and some of the guests even left with some wonderful gifts won in a raffle. Among the prizes were body butter lotions and a uniquely specialized lotion to take care of the winner’s artistically tattooed body. The grand prize was awarded by Rank My Dentist to the lucky Chrissy Reilly and special guest Adrian Grenier who won a $800 check for a professional Cosmetic Teeth Whitening procedure done by one of our country’s top dentists. The event overall was a success where everyone left happy and excited for this spectacular magazine’s new outlook on fashion and art. 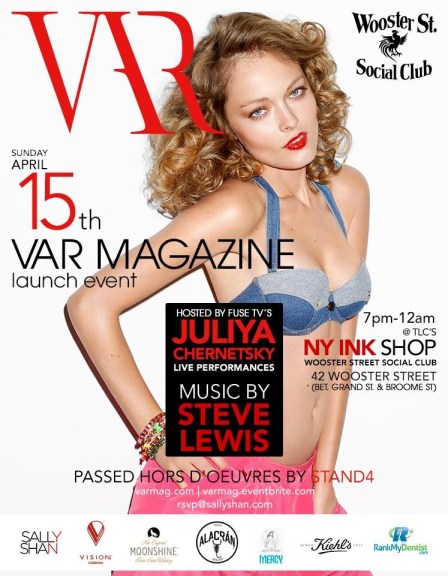 Give Back A Smile

RankMyDentist.com helps patients find the right dentist for their needs. We aim to evolve the archaic form of doctor-patient interaction by allowing patients to connect with doctors at any time.

Spring break is coming up. So are Easter, Passover and Kwanza. Most public and private schools are off. College students are...

Valentine’s Day is right around the corner. Every local drugstore to big named department stores are carrying everything from...

Toothaches are painful and often times mind numbing. The pain can be so bad that you cannot focus on anything else; whether it is...